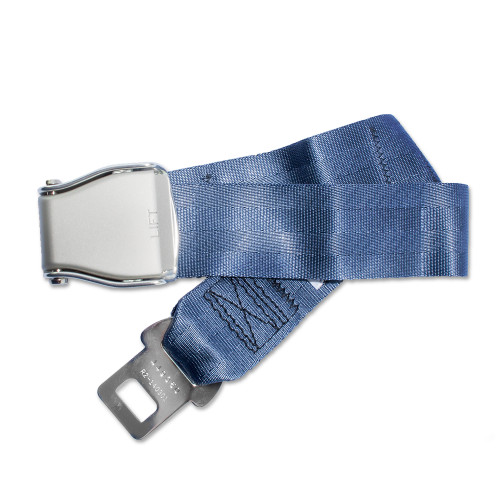 Are you familiar with the phrase, "that's my jam." It does not refer to some kind of gelatinous fruit preserve that tastes delightful when spread across toast, bagels, croissants, or pastries. Well, let's not be silly - of course it could. We could easily imagine a situation in which two people arrive at the same and last jar of jam in the aisle of a grocery store in some kind of post-apocalyptic scenario, each placing a hand on it one right after the other. The first person to touch the jar would say, "that's my jam," and what would ensue henceforth would be, undoubtedly, contentious. But that's not what we're talking about. The phrase, "that's my jam" instead refers to someone saying that something is one's "thing" or within one's so-called "wheelhouse." Fat people on airplanes - that's our jam. We are, as it were, More of Me to Love. So when we say, check out our Airplane Extenders, it is not casually. It is not flippantly. It is not another synonym of those words. It is with seriousness, a near antonym of those words. If you're ready for this jam, read on.

You've heard of BYOB? Now you can BYOE. That's right, Bring Your Own Extender for comfort and safety while you jet-set about the globe. Or, you know, go from Tulsa to Lincoln.

We offer two types of Airplane Extenders, simply named the Type A and the Type B.

Type A fits all major airlines except Southwest (patience, my friend, a detailed list lies below). It is manufactured by AmSafe and comes in blue.

Type B fits Southwest Airlines only (they just had to be special). It is manufactured by Davis Aircraft Products and comes in blue.

Both types are FAA Compliant, and boast safety tags detailing their compliance.

With your own airplane seat belt extender, which can adjust to add up to 24" of additional length, you will be prepared for that seat belt sign and safe from any jostling in your seat - or any flack from your otherwise delightful flight attendants.

All extenders come with an Owner's Card to verify that it's yours and a Carrying Case to keep your extender protected and compact. Put your Airplane Extender and Owner's Card in your velour Carrying Case, drop the Case in your bag, and you're ready to fly!

Here's the list of other airlines that the Type A Airplane Extender fits. Thank you for waiting patiently.

The use of specific airlines is for informational purposes only and does not constitute an endorsement by any airline company or brand. Airlines reserve the right to refuse the use of any extender but what they provide. Consult the airline you intend to use the extender on before use, and abide by their instructions regarding use. Read complete disclaimer here before using extender. Reseller of airplane seat belt extenders.

Deluxe Bamboo More of Me to Love Bra Liner (3-Pack)